Hedda and I went to see Reefer Madness: The Musical Friday night. The musical was based on the original 1936 short film Tell Your Children, which consequentially became a cult classic for it’s bad acting, poor production values, and ridiculous portrayal of the physical and social effects of marijuana. Wikipedia has a pretty good history of the film. 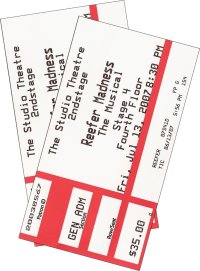 The story centers around Jimmy and Mary, two young and naive all-American children whose lives run tragically afoul because of the Stuff. Solid performances are turned in by Andrew Sonntag as Jimmy, and Lawrence Redmond as The Lecturer (and several other humorous bit parts), but Lauren Williams absolutely shines as Mary Lane, the hilariously-too-innocent girlfriend. Her extraordinary facial control and body acting brings the character to life in exactly the right high-contrast, caricatured way. On any other show, it would be absurd over-acting, but in the re-make of the campy classic film, it’s absolutely perfect. And she smokes it, so to speak. The rest of the cast has yet to fall into that groove, and sometimes seem almost embarrassed to really play their parts. I don’t blame them - I might be, too - but, hopefully they’ll follow Ms. Williams’ lead and get over it.

The cast sounds good and harmonizes well, and it’s easy to hear on the small stage. The music is funny and fun, though mostly forgettable. The notable exception is the musical’s theme, which Hedda and I have been repeating to one another constantly since our attendance: “Reefer Madness…Reeeefffer Maaaaadness……Reefer Madness…Reeeeffffeeeer Maaaaaadnesss!” There isn’t much in the way of dance, except for a brief, well-done number “Down at the Ol’ Five-and-Dime”.

The run at the Studio Theater has just opened, and it definitely shows. Some of the rough edges include a continuing prop problem with a falling-over lamp, a follow-spot that can’t seem to find the leads in time, poor lighting and design (although it’s hard to tell: it could be the players missing their spikes), and not enough brownies to meet demand during intermission! There was also some - I’m not sure what else to call it - confusion about the set. The main stage was where all the action took place, and the only area ever lit, but there was what seemed to be another, smaller, set area off stage right. There were other set pieces - the refrigerator alluded to, prior to Ralph’s major munchies attack, for example - and at a few points, it seemed as through action was intended to be happening there. But since it was never lit, whatever it was was stillborn. It seems the production could have used another week or two of rehearsals to iron out the kinks.

Overall, it’s a fun show, as long as you go into it expecting it to be what it is. This isn’t the next great American Musical, but it is a fun evening nonetheless. Hopefully the wrinkles we saw will be gone by the time you see it.