After a couple of of months of Metro time, and a few weekend hours here and there, I’ve finally beaten Mario & Luigi: Partners in Time for the DS. It was recommended to me by Greg as a pretty good RPG for the DS.

I partially agree. In many areas, the game makes some neat innovations, but in others it falls short. Let’s start with the good.

The graphics are good. Nothing spectacular, but an RPG’s graphics don’t have to be. They get the point across, and there are some fun niche animations that are used to good effect throughout the story. The sound is not much more than bleeps and bloops, leaving much to be desired. 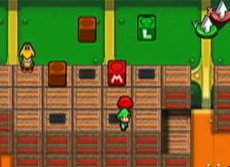 The gameplay is an interesting twist on the standard Mario bop-the-enemy-on-the-head fare. The map is strewn with question blocks to be hit. These blocks usually yield coins, but also offer power ups and items for battle. A neat feature is the ability to get the drop on almost any enemy (except for ones with spikes sticking up) by jumping on them as the wander around world screen. When battle initiates, Mario drops in from above with a pre-emptive hit.

The battle is where this game really shines. Every attack in battle requires some form of interaction. To begin with, each of the four party members - Mario, Luigi, Baby Mario, and Baby Luigi - are assigned one of the four buttons on the DS. Successfully attacking requires hitting the appropriate character’s button at the right time based on the on-screen action. For example, imagine Mario is to make a standard attack. The basic attack is, of course, a bop-on-the-head. In order to successfully execute the attack, you must hit the Mario’s button (the A button) as he stomps on the head of the enemy. Failure to do so will do significantly less damage, and Mario will bounce to the floor in an embarassing display. 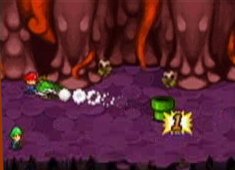 More advanced attacks are accomplished similarly. Utilizing the special Bros. Items, so called because they require the brothers to work together, can often demand great concentration and timing to rack up big damage. For example, Mario and Luigi can kick a green shell back-and-forth against an enemy. Whenever the shell reaches one of the brothers, you are required to hit the button for the character. Failure to do so sends the shell spinning off the screen, but success allows for massive damage to be accumulated. The catch is that the shell speeds up slightly with each successive hit, thus becoming consistently more difficult.

Enemy attacks tend to be rather basic, from simply running into a character to spitting a fireball, but in another fun twist the brothers can defend and counter-attack. Each enemy gives some slight indication of how and who they are about to attack just before doing so, and a well-timed jump can not only repel the attack, but deal some damage in return. It’s a lot of fun trying to figure out the patterns to the different enemies throughout the game.

Overall, the combat system is very clever, and is the highlight of the game. It’s somewhat reminiscent of the old Final Fantasy VIII combat system, except that in Partners in Time it doesn’t suck.

What does suck is the story. The initial plot hook is not completely terrible, but it’s executed poorly from thereon. Most of the plot devices come out of nowhere, for no reason. More often than not, you head to a newly opened world simply because you’re told to. The maps are horribly linear, meaning most of your wandering serves no purpose but to kill time. Sure, there are the aforementioned blocks found throughout, but the rewards from those blocks rarely graduates beyond some additional Bros. Items; so it loses its luster after the forty-third time. And clocking in at just over fifteen hours, all the mindlessness previously mentioned makes the game even shorter in reality.

Also, the dialouge is simply terrible. Clearly this game was written for a young audience. Much of it is silly, and there is a ton of drawn-out slapstick that ends up being almost painful to watch after the ninth time. One particular highlight, though, is a scene where the Hammer Brothers get Shroob implants in them, and end up talking in l33t speak. I almost fell out of my chair laughing.

So overall, is this worth playing? Probably not for a seasoned gamer. There are some neat things done, but the pain required to enjoy those moments makes it a game I just cannot recommend. It might be worth it for a younger player who is just getting into RPGs, but not for many others.