After the manhole explosions in the neighborhood on Saturday, the power was out on 13th Street north of the park. That included the traffic lights around Logan Circle itself. 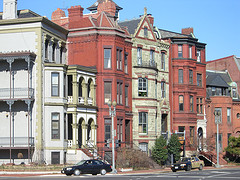 As is typical, I walked by the circle several times over the weekend to and fro my various errands. The lights were blinking red instead of their usual behavior, and I noted the unusual sight of drivers safely navigating the circle with intelligence, care, and respect.

If you are not familiar with the navigational disasters that are DC’s traffic circles, be thankful. In theory they are a beautiful and effective method of safely intersecting several streets at once. In actuality, they are a nightmare for residents and out-of-towners alike. Peppered with inscrutable lane markings and flanked by a forest of poles on which are hung traffic lights pointing in every direction but yours, travelling around a circle is an exercise in confusion, frustration, and angry, dangerous driving. Every attempt by DDOT to improve the situation with clearer lane markings and more lights have simply made things worse.

Paradoxically, it seems that removing the lights altogether allowed people to stop worrying about following the inane rules and just drive. Instead of fretting over whether that red light they just ran was actually for them or for the waiting motorists at Rhode Island Avenue, they could focus on merging into and out of the traffic travelling around the circle at a steady moderate speed. There were no honking horns and no screeching brakes, and cars stopped for pedestrians crossing the streeet.

So, DDOT, please leave the traffic lights at Logan Circle off. Traffic circles are self-organizing, chaordic systems. Messing with it just makes them worse.