Update:The video of the first debate has been posted. 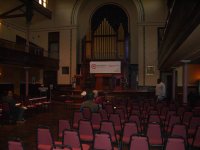 We just got back from the first debate of the Maryland U.S. Senate Race, graciously hosted by the Urban League of Baltimore. It was a historic evening since this was the first three-way debate of its kind in Maryland’s history. I am certainly biased, but I think Kevin came out a clear victor here. However, to read about it in the media so far, one might think Kevin Zeese wasn’t even there!

Let me explain: First, you should go read some of the articles that have already been posted. Start with the Washington Post’s article Steele, Cardin Draw Distinctions. To begin with, the title doesn’t even mention Kevin, but take a look at my picture of the candidates on stage. These three candidates were quite clearly on this stage as equals, but the Post headlines with only the two major party candidates’ names. Furthermore, the Zeese platform is far more unique than the other two, and yet he doesn’t even rate mention until the second to last paragraph in the first page of the Post article. Are you kidding? The Post is cleary not reporting the facts here.

The Washington Times, already a well-known bastion of reporting excellence, is even worse with their article Steele, Cardin Wrangle Over Race in Debate. Kevin Zeese isn’t mentioned until the third-to-last paragraph. Nice. He’s given equal time on stage with these guys, and he gets almost zero coverage.

Cardin opened with a series of well-rehearsed but vacuous statements - the same old thing we’ve been hearing for fifty years. It was well-spoken, and the Cardin supporters in the crowd cheered loudly. Amusingly, he did not mention Kevin Zeese’s name a single time, continually referring only to Steele as “his opponent.”

Steele was next with his opening remarks. His first order of business was to publicly scold Cardin for his failure to even recognize Zeese’s presence on the stage. He said of Mr. Cardin’s clear exclusion, and I quote this, “What you just watched was the problem of Washington. They run their mouths, but they do not listen. After 40 years of service, honorable service, he still has not learned to look around the room and shut up and listen.” He then laid out why he felt his candidacy was for the voters. To my mind, it was a lot of high-level, feel-good fluff; there was a lot of personal back-story, akin to the Olympic Athelete sob stories that tug on your heartstrings between bobsled runs.

Zeese, as one might imagine I would say, hit the nail on the head by putting out why he was running and what his goals were. His pointed remarks began with the simple observation that our country is going in many different wrong directions at once, and he reminded the voters in the room of their place in history.

The questions were then posed to the candidates, with each given equal time to respond to the same questions. Later on, questions from the audience were directed at the candidates individually, with three to each candidate prior to closing remarks. The video will be up later, so I’ll just refer you to it once it’s posted.

Let me repeat, though: All three candidates were given equal time, and all got plenty of applause and audience reaction. And Zeese barely merits mention on the first page at best. Disgusting.

Throughout the evening, Cardin and Steele continued to bash at one another, while Kevin kept making his points. Even when he lambasted Cardin for posing as a peace candidate - despite Mr. Cardin having voted once against the war several years ago - and fourteen times in favor since then, he refused to awknowledge Zeese. Instead, he continued to favor pointing fingers at Steele.

Similarly, Steele kept attempting to differentiate himself from Cardin. Several times he highlighted the differences between them. Unlike what has been implied by some sources, though, the issue of abortion wasn’t even raised tonight.

It is interesting, then, how neither candidate would approach the issues Kevin continually raised, refusing to attack any of his stances on the issues. The audience, though, were not as afraid as the two would-be frontrunners to grasp the issues at hand.

Many times throughout the evening, I looked around to notice people wearing even Cardin and Steele shirts and paraphernalia applauding Kevin’s remarks. At one point, the issue of American funding for Israel was raised - that it was raised at all was itself a cause for celebration. As Kevin railed against our blind, one-sided support for Israel, there were audible gasps and exclamations of shock from the audience as he described how a nation the size of New Jersey receives more aid than Sub-Sarahan Africa, Latin America, and the Caribbean combined. 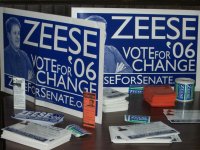 A particularly powerful moment came when, during a question from the audience directly to Kevin about whether or not one is throwing their vote away by casting a ballot for Zeese. Kevin countered with the example of the abolitionist parties prior to the Civil War: During that time, the two major parties were the Democrats, Southern slave owners who were pro-slaverly, and the Wigs, northern industrialists who were not pro-slavery, but not really against it either. The Republicans at that time were formed as a third party against slavery, and eventually rose to the Presidency with Abraham Lincoln. In that debate hall - a former church which was a major part of the Underground Railroad - to that audience - filled in majority with black voters from Baltimore - Kevin asked if they would consider a vote for the third party in that troubled time a wasted vote. The point was made beautifully.

Afterward the debates ended, I spoke with a lot of people and handed out a lot of Zeese palmcards. I had a blast. The highlight of my evening came as one of the Urban League ladies was closing the front doors to the building. She was having trouble getting the latch closed, so I gave her a hand. As I finished, she said, “And who are you with…?” I pointed to the Zeese sticker on my shirt, and she said, “Oh, Zeese! He was the one up there talking sense.”

She took a palmcard for herself, and several more for her friends. If only the media were as open-minded and rational.