I upgraded to Vista SP1 this weekend. There really is no reason not to try, especially since the version I have has a disk-imaging backup tool. So I could lobotomize my machine and re-insert the old image if something went horribly wrong. Heck, anybody with a Linux boot disc and dd could do the same. Everything went smoothly, unlike Thud, who seems to constantly have problems with the thing. 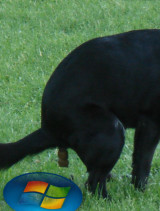 Personally, I don’t find Vista to be the steaming pile of crap that is so commonly reported on Slashdot and the like - well, any more steaming than a Microsoft operating system usually is. I mean, sure there have been some minor hiccups with certain driver upgrades, but it’s never blue-screened on me. I’ve even had some updates go awry, but it recovered nicely when I did a hard power-cycle. Sure, it’s not a break-through tower of innovation like OS X, but it’s a relatively solid next-version operating system.

I don’t even mind the UAC security pop-ups that are so widely panned. Actually, I can’t see how they would be at all annoying unless your daily job involves opening and closing administrative and system maintenance tools all day. And in that case: What, exactly, do you do for a living? Though playing Mother-May-I with my computer is neither the best nor final move in the security game, it is a reasonable response to certain classes of maliciousness and mistakes that are quite common in the current landscape. I appreciate UAC in the same way I appreciate needing to sudo when using Linux.

This is my first foray into this argument, and I’m pulling out my toe after this brief dip into the chilly waters of the Vista-sucks sub-genre. (Being baited just isn’t as fun as it used to be.) It seems to me that most of the people howling about how much Vista sucks are just the usual slash-trolls, squirming in pleasure at the orgy of “Vista Sucks; Mac/Linux/BeOS/Whatever Rules” articles and posts, just because they can. That’s cool; whatever gets your rocks off. But all-in-all, Vista is pretty good. Sure, there are problems with it, but they’re being fixed as fast as a megalithic monopoly can move. And how quickly we’ve forgotten that the same rhetoric was spewed about the now-venerable Windows XP when it was released. It’s the same people who swore they’d stick with Windows 98 until 2098.

So, to summarize: Vista is OK. Service Pack 1 installed with no problems. And my mission of lowering the signal-to-noise ratio in the internets, even if ever-so-slightly, has been successful. Back to work for me.