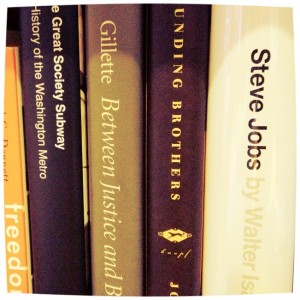 I have always had a thing for books. I started reading when I was a kid, and I never stopped. I oscillate regularly between fiction and nonfiction, binging for a while on science fiction and epic fantasy before devouring title after title on politics, economics, science, and philosophy. Packing for every trip included at least one hardcover – preferred over paperbacks for their sturdiness and aesthetics on my bookshelf – and sometimes two or three.

Since then, every single book I have read has been on the iPad. This wasn’t because I had some idealistic desire to switch to eBooks. It just sort of happened, in retrospect I think because they were both cheaper and just easier to get. I have bought and read nearly two dozen books on my iPad in the past year-and-three-quarters, but I planned on purchasing the hardcover for books that I really wanted on my shelf, that I really thought were special – the books I really wanted to read, the way you only can with a hardcover.

I had pre-ordered it, and also received a copy as a gift, so I had two copies sitting on my shelf while I churned through the reading list on my iPad. Finally, a couple of weeks back, I located the large, white cover, pulled it off the shelf, and dove in.

It immediately pissed me off.

Not the content of the book, what Walter Isaacson wrote, but the book itself – the actual physical thing. I had had no problems reading from wood pulp and ink for three three decades before the iPad, yet suddenly I found myself constantly annoyed by its characteristics. I was shocked at all the annoying things about a paper book that I had never noticed before.

The paper book is bigger than my iPad, and it’s heavier, too. The book takes up four or five times the room in my backpack. Before, I had sometimes carried around two or three of these things at once! How the hell did I ever do that?

It’s more cumbersome and awkward, too – a lot more. My iPad is evenly balanced and always the same shape, making it a simple matter to re-orient it, hand it off to someone, or just lean it against something for support. The physical construction of the book – there’s a hinge in the middle! – makes it lopsided most of the time, which makes it difficult to re-orient. And don’t you dare try laying it flat or propping it up without something holding down the pages – you’ll lose your place in no time as it unhelpfully flips pages around.

What is a book for, if not reading? And yet, though I had never noticed it before, a book on paper is actively hostile to reading. The pages curve inwards towards the binding, distorting and hiding the words. It isn’t a constant thing, either, because the curvature and distortion becomes worse as you get closer to the binding. I regularly find myself physically reorienting the book – made more difficult by its aforementioned cumbersome nature – just to read the words on the page! In contrast, the words on my iPad are always flat and never distorted.

The final nail in the coffin is the paltry lack of features in the paper book. There is no built-in dictionary, so I can’t just tap a word and check its definition, nor is it possible to search for all occurrences of a particular word or phrase. As a little bonus, if I have a few moments to spare, I can pull out my iPhone and pick up where I left off; my current spot is synchronized automatically. Though they are not essential, I have become used to such niceties.

Which is not to say that reading on the iPad is perfect. Glare can be an issue, especially if I am outside. A paper book isn’t going to run out of battery any time soon, and it isn’t prone to breaking if I drop it from a height. Nor is it a tempting target for thieves. And as a long-term archival mechanism, or just a pretty thing to show off on a shelf, the paper book wins hands-down.

But for reading, the actual process of reading: I’m a convert. Give me an eBook.