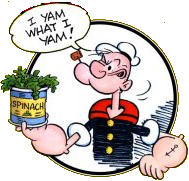 I went to the Whole Foods on P street this afternoon to pick up a few sundry items, as well as to avert an impending toilet paper crises warned of by my wife. As I walked through the produce section, I noticed that the huge bin normally filled with the deep green leaves of fresh spinach was mysteriously empty, replaced instead with a small hand-written sign taped on the front. I didn’t read it; I knew what it said.

If you have been living in a box, there has been an “outbreak” of E. Coli bacteria in a few pre-packaged bags of the vegetable, killing one person and sickening 170 others. This has caused the entire spinach - nay, the entire salad industry to grind to a halt while federal investigators attempt to track down the source of the contamination. According to the New York Times, there are some twenty inspectors focusing on nine different farms in California, and the economic fallout could reach up to $100 million.

Are you kidding me? We’re spending god-knows-how-much money for inspectors and laboratory technicians to seek out a bacterial outbreak that has been responsible for the death of a single, solitary person? Are we out of our goddamn minds?

It’s time for a reality check: The U.S. Centers for Disease Control and Prevention estimates there are roughly 76 million cases of food-bourne illness in the United States every single year. Clearly, getting sick from food is rather common part of the human condition. Why is there so much media attention these 171 out of 76 million cases? Is there something extra special about these particular 0.000225% percent of the regular illnesses?

Now it’s time for Fun with Math: So, if the population of the United States is 300 million, then there’s roughly a 1 in 4 chance of me getting some form of food illness this year, although chances are I won’t even know I’ve had it. Then, given the rate of contamination in spinach that we’ve seen, my chances of getting sick from contaminated spinach this year are 0.000057%. If the mortality rate is 1 out of 171, that makes my chances of dying from eating contaminated spinach about 0.0000003%. The population of the United States is 300,000,000, meaning that 1 person is going to die this year from contaminated spinach.

And that person is already dead. Can I have my spinach back, please?