I was so busy, I only had time to unbox the Chumby after it arrived yesterday. Late last night, when my brain finally fried and I had no energy left for work and such, I finally plugged the little bugger in. The short version is: So far, it’s pretty slick.

It’s smaller than I thought it would be, but not ridiculously so. I was imagining something cantaloupe-sized, but it’s really more soft-ball-sized. In retrospect, the smaller size is probably better than the larger; if it were larger, it might overwhelm the place where it’s sitting, but the smaller size just sort of snuggles in with everything around it.

Aside from the painful experience of tapping out my WPA2 pass-phrase on the Chumby’s touch-screen, it connected to our home network with no trouble at all. That’s a really good thing, because it’s just a paperweight without a wireless network. Widget configuration is handled almost entirely on the Chumby web site, and the Chumby itself will auto-update itself fairly quickly after you make the changes online. 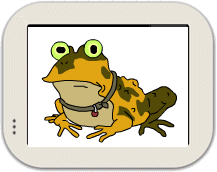 The widgets themselves range from the mundane (weather and sports scores), to the enjoyable (photos from Flickr, horoscopes, and the Pandacam), to the just plain odd (screen cleaner and hypnotoad). Widgets are grouped into channels, and the Chumby will cycle through the various widgets in a channel indefinitely. If something catches your eye, you can pick up the Chumby and interact with the widget to get more information or change what’s going on. When you set it back down, it goes back to cycling through the widgets.

I admit I was confused by the terminology at first. It took me a while to figure out that widgets are not channels, but rather channels contain a sequence of widgets. Once I realized that, everything suddenly made sense. You could have a “Morning News” channel, for while you’re getting dressed, and then a “Company’s Over” channel that just displays your photographs.

The Chumby can also play music, and this morning I had it streaming Groove Salad while I was getting dressed. It plays the music in the background, while cycling through the widgets in the current channel. It also has an alarm clock, although I haven’t tried it.

So - and this is the big question - what’s the point of this thing? I was wondering that myself, even as I ordered it, and many of my friends and co-workers had asked the same question. The short answer is that there really is no point. If you try and find a purpose to the Chumby, you’ll convince yourself they’re stupid. Maybe they are. But the Chumby is really more like a piece of furniture - a piece of info-furniture. It just sort of sits there, doing its thing, broadcasting information into the room. It also makes a good modern clock-radio replacement, since it’s very easy to play internet radio or MP3s on it. At bare minimum, the thing is a steal as a wireless digital picture frame.