A few weeks back, something bad happened to my computer.  I’m not sure what, but my nightly backup reported a failure to run due to corrupted folders.  So I immediately pulled out the toolbox and scheduled a chkdsk for the next reboot.  And then I rebooted. 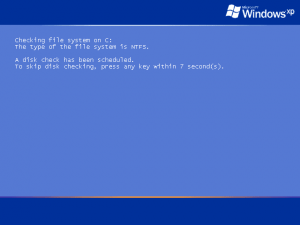 When Windows rebooted, I was greeted with the familiar notice, “A disk check has been scheduled.”  As anyone familiar with Windows knows, you then get a ten second countdown to abort the disk check.  I waited (10…9…8…) patiently (7…6…) while it ticked (5…) off (4…) every (3…) excruciating (2…) number (1…), and then … nothing.  I had one second left, permanently.  The computer had frozen, and hitting the any key did nothing.  Hitting CTRL+ALT+DEL did nothing, either, and so I was forced to hard-off the machine.

On reboot, I received the same prompt, and once again it hung at one second.  I couldn’t even get it to abort the disk check, the very purpose for the countdown prompt!  Woe is me!  I was stuck in a reboot loop.  At this point, I am going to fast forward over the gory details of booting the rescue tools off my install CD, unlocking my encrypted drive, fixing the disk, resetting my TPM state, and all that.  Trust me, it’s for the best.  But in the end, I had a working machine again.

Last night, and right before bed no less, I encountered the same problem.  Googling led me to the same results I had seen before.  But this time, reading through the top result, there was a new post.  The comment by Tayloradical on December 10 recommended removing all the peripherals, including any SD card.  I have lots of peripherals, including an SD card I use for ReadyBoost.  After a somewhat systematic cycle of decoupling and rebooting, the chkdsk finally kicked off normally after removing the SD card!

So, if you encounter this problem, try removing your SD card, and maybe some other peripherals as well.