Chris and I were rummaging around his condo, and we discovered a huge box full of old 3.5” floppy disks. This included a big-ass Microsoft Windows 3.1 box, distributed by Logitech, bundled with a mouse. Yes, it’s true. Microsoft has bundled their most advanced, powerful, feature-packed version of Windows ever with a lousy mouse.

To see just how advanced, powerful, and feature-packed it was, we decided to install it on a VMWare virtual machine. Amazingly enough, VMWare actually has an option for installing a Windows 3.1 machine. Usually it takes them a while to get up-to-date with the latest versions. 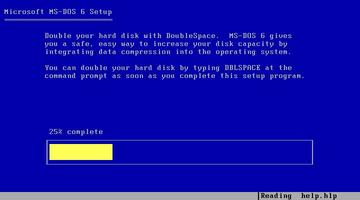 First, we had to install MS-DOS. The MS-DOS 6.0 disks were actually some sort of upgrade, so we had to start with the MS-DOS 5.0 boot disk. It booted up in literally the blink of an eye, and after muttering a few incantations using fdisk, format, and sys, we had a 1GB FAT partition ready for the MS-DOS 6.0 install.

Then I installed the MS-DOS 6.22. Holy crap! This upgrade comes with a lot of new features, and is the fastest, most stable MS-DOS yet! I just can’t wait to double my space with DoubleSpace. I bet they’re just being my modest, and it will actually TRIPLE my hard drive space. And since comes with the operating system, and the setup program told me about it, I’m sure it will be a safe place to store all my most important data. No corruption for me! 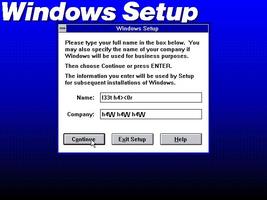 Then I got to install Windows. Microsoft has finally learned their lesson from all of the anti-trust proceedings against them and seperated their operating system into distinct parts. The part that manages your 640K of memory, as well as disk access, is installed separately from the graphical user interface (GUI).

Windows takes up five whole 1.44MB floppy disks, so this took a while. (And by “a while,” I mean, “two minutes.” And it only took that long because I had to constantly go back through the stupid VMWare hardware menus to change the image the floppy drive was reading. They definitely did not make this thing easy for people installing Windows 3.1 from a floppy image.) Can you belive it? A Micrsoft operating system that installs in less than four hours! How cool is that?

After a little bit, the new Everything’s-Flat (tm) GUI started up, and I was asked for my registeration information. As you can see, I had to use my awesome technical acumen to fake out the advanced CD-key registration routines. I hope this isn’t one of those phone-home anit-piracy programs!

I also had to decide which of Windows exciting new features I would want to install. Now, for those of you who don’t know too much about these new computer thingys, you only have so much room on your disk drive to install neat features and programs. Since I have a big 1GB disk on this virtual machine, I installed everything. However, I have to be careful! It total of 2,198,505 bytes would be used up, leaving me a scant 056,001,856 bytes to install games and other cool programs. 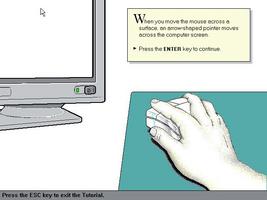 Windows 3.1 is now up and running. How about that? However, now comes the important task of learning how to use the advanced new user interface. For starters, my copy of Windows came bundled with a new-fangled input device called a “mouse.” I’m not really sure why it’s called that, since it is neither furry, cute, nor squeeky. Fortunately, Windows comes with a tutorial for how to use the mouse. Unfortunately, before I had seen the tutorial, I had made repeated attempts to tempt it into motion with some cheese. This resulted only in an unsightly stain on my desk.

It should be noted that Windows 3.1 is the first Microsoft product that contains software features designed to drive business to certain business partners with whom they have signed marketing agreements. The mouse tutorial exhibits Microsoft’s partnering with the American Academy of Orthopaedic Surgeons to drive business to their member doctors by increasing the amount of Repetitive Strain Injury. The example drawings are clearly meant to train people to use a mouse in the most destructive way possible.

Finally, in a move clearly intended to compete with Apple’s fancy new Aqua interface in Mac OS X, Microsoft has spiffed up their Everything’s-Flat interface with an exciting new feature shown off in the demo: Humpty-Dumpty Windows! The windows just sort of fall apart, and you get to have fun putting them all back together again.

If you look closely, you can also see an example of Microsoft sneering at the alpha blending used in other OS for transparency. Instead, they spice up their look-and-feel with dithering.

Unfortunatey, none of these features appear to be functional beyond the demo. Let’s hope the boys in Redmond can hammer them out in time for the Windows 3.2 (codename Longhorn) upcoming in 2006! I just can’t wait to see them! 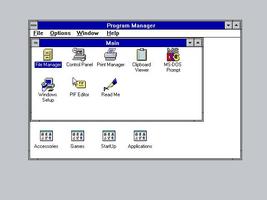 Microsoft has really turned up the heat on the competition by bundling a whole slew of new applications with Windows. The combination of File Manager and Program Manager of done away with Explorer, and it can be said that the stability and responsiveness has really been given a dramatic improvement.

Windows 3.1 also ships with Write and Notepad, as well as a few programs using the dramatic new Blue Boxes (tm) themed interface, such as QBasic (a built-in programming language) and MS-DOS Edit. Of course, it also comes with Solitare.

A new feature in Windows 3.1 is single-tasking. Microsoft’s own usability studies have shown that people get confused by doing more than one thing at a time with a computer. To that end, this new version has a new feature that allows applications to interfere with each other. If you start keeping too busy, the system voices its disapproval by locking up, crashing, or flashing a helpful error message on the screen using the Blue Boxes theme. This also helps prevent workplace stress and keeps productivity from getting too high. 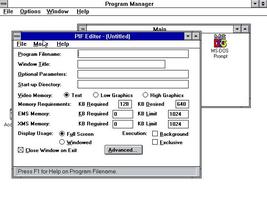 Microsoft’s operating systems have always been famous as a target for malicious virus writers and hackers. The news is filled with reports of worms like Sasser, Blaster, or Michelangelo. The development group at Microsoft has included some features to help with this menace, the foremost being Microsoft Anti-Virus.

However, Microsoft’s market research arm has determined that the virus writers are a lucrative niche market just waiting to be tapped. So just as Microsoft provides advanced tools like QBasic for the commercial development industry, they are now offering tools targeted at the virus writers. The new PIF Editor takes the pain out of hand-coding the Program Information Files that many viruses use to propagate. The increase in virus writers’ productivity will no doubt increase the demand for security software, such as the aforementioned Microsoft Anti-Virus. Bill Gates sure knows how to play the market against itself!

My scan came back clean this time, but I’m sure those wiley viruses will give my anti-virus software something to do soon! 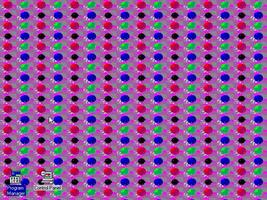 Windows 3.1 is the latest version of Microsoft’s famous operating system. There are a host of new features packed into its five floppies, from new backgrounds to better shutdown obfuscation solutions, and each of them make this a must-have upgrade.

Thanks for checking out my little review! If you haven’t realized this is a big joke, then go look at this or something.