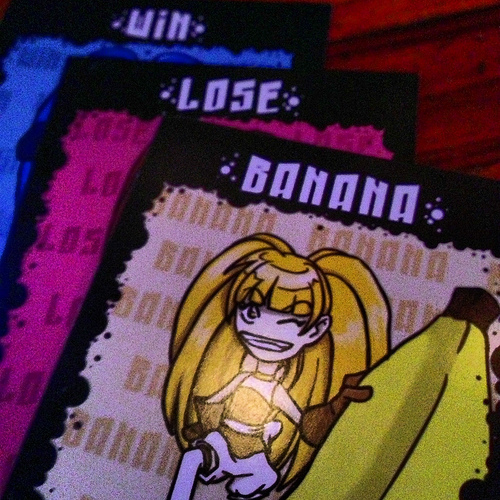 Little pockets of downtime pepper our lives: waiting for the bus, waiting at a crosswalk, waiting for that one person in the group to come back from the bathroom again. We make smalltalk, we look at our watches, we check our phones. These moments flit away like a mote of dust passing through a sunbeam, a few seconds at at time.

Win, Lose, Banana is a game for these moments. A typical game lasts less than ten seconds, turning that awkward silence where everyone would normally be feigning sudden extreme interest in the patterns on the tin ceiling into an awkward argument over which player has the banana.

Win, Lose, Banana is a so-called convincing game for three players. It consists of merely three cards: Win, Lose, and Banana. Each player randomly choses a card, and the player with the Win card simply shows it and announces victory. Congratulations! The winner is then entitled to the banana.

Ah, but who has it? The two remaining players must then convince the winner that they have the banana – and that the other player is the loser. If the winner chooses correctly, both she and the banana may smugly gloat over the loser. But if the loser  manages to be more convincing, he must mercilessly mock the other two players. The only real rule is that you may not simply show the winner your card; everything else is fair game. The lengths to which players can go to be convincing are otherwise bounded only by decorum and your imagination. And perhaps the length of time it takes that one friend to pee.

It’s hard to describe how much fun I’ve had with this game. Passing moments on the street with friends would sudden turn rowdy as we argued over possession of the banana. And at only $1, it’s a no-brainer that you ought to buy it. In fact, buy a dozen and give them away to friends. This may be the single best value in gaming – ever – and quite possibly the best $1 you’ve ever spent.