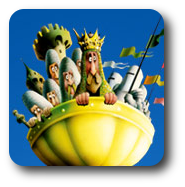 Hedda surprised me with a trip to see Spamalot for my impending birthday. What an awesome gift!

The show is quite funny, and pays due homage to many of Monty Python’s most famous gags. The show is loosely based on Monty Python and the Holy Grail, although they do rip out the hit “Always Look on the Bright Side of Life” from The Life of Brian. Unfortunately, the song isn’t nearly as funny when not sung by a chorus of crucified men.

The first act is definitely outshone by the second, as the former is mostly an attempt to cram as many famous Holy Grail scenes as possible into an hour. Several scenes, such as the French Guard, have been expanded and extended from the original material, usually to good effect. Occaisionally, however, I found myself shakinig my head at their attempt to drag as much as they could out of an already old joke.

The second act, however, deviates fairly significantly from its namesake’s plot, and delivers fresh side-splitting hilarity in the usual style. The ending is utterly fantastic, and the Diva almost steals the show. All-in-all, the second act makes the show.

So, should you see it? If you hate Monty Python, then no. If you watch And Now For Something Completely Different every other weekend, or maybe have a blog category named after one of their works, then the answer is an emphatic yes.

Thanks for my present, Hedda!