I’m a long time fan of Nine Inch Nails, so news of Trent Reznor’s latest release would be exciting enough on its own. Above and beyond the music, though, is his trail blazing attempts at media distribution in a modern world - one without the record companies greedily leeching profits from the artists for discernible purpose. He knows there are ways to make both music and money in this brave new world, and he’s willing to take risks to find the right approach. I think this may be the best attempt to date.

With the release of Ghosts, Trent begins by releasing the first nine tracks, entitled Ghosts I, for free on his web site. Go download them now, if you’d like. Then, the next three sets of tracks can be bought for only $5. At that price, there’s almost no reason not to buy it! As a bonus, both sets come with a 40-page PDF booklet about the music, a bunch of cover art, high-resolution wallpaper images (in both 4:3 and 16:9 ratios), and avatar art for your favorite forums.

And then we move into the physical realm. If you prefer discs, or like me, just have to have every NIN album ever released, you can purchase the two-CD set, including a printed sixteen-page booklet. The cost is a mere $10. Targeting the real collectors is the $75 two-CD set in a fabric case. It is accompanied by a Blu-ray disc with slide show set to super-high-quality versions of the music. And for the budding musicians in the world, it also comes with a data DVD containing all of the recordings in multi-track format - ripe for remixing. (More on that in a moment.) 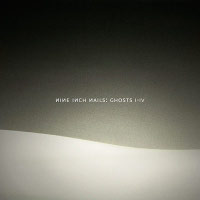 For the die-hard NIN fan, a limited edition collectors set was offered for $300. It included everything before it, as well as two high-quality, frame-suitable prints of the cover art, and a fabric-bound hard-cover book of the art, signed by Trent Reznor. Only 2500 were made, and even at $300, they are already sold out.

Finally, on top of all of this, the whole thing has been released under a Creative Commons BY-NC-SA license. This means that not only can you share the music with your friends, but that anyone can use Ghosts as a starting point for their own work, including up-and-coming amateur musicians, YouTube videos, or background music at your church. And all of this without the fear of gray-area legal repercussions from a broken copyright system.

So download the music, and enjoy it. Buy the rest, if you like it. Share it with your friends. In the meantime, after I’ve had a chance to listen to it, I’ll post my thoughts on the actual music. The non-musical portion is certainly amazing.