I am seeing a lot of exuberant posts from Democrats, or more often from anti-Republicans, around the blogotubes. After they’ve finished dancing, I hope they hold accountable the party for which they so eagerly cast their votes. Don’t forget, this is the party that ran people on a “Peace Candidate” platform who voted in favor of the war almost consistently. You’ve put these people in office, and if they turn out to be jokers, I am holding you accountable.

The problem is this: Thud says:

So here’s the choice as I see it: Admit that the Democrats had an agenda that appealed to voters more than the Republican agenda. Or admit that the Gop [sic] candidates are so atrocious even the independents were willing - no, eager - to vote for the proverbial yellow dog.

I cannot admit to the first, since their agenda hasn’t changed in twelve years, and neither has the electorate. The situation has changed, but even in that the supporters seem to be covering their ears and humming as to the actual agenda the Democrats as a party are espousing. In fact, the Democratic leadership have even been saying publicly to not expect much change in Iraq and that impeachment is off the table. They have no plan for universal health care beyond what has failed for the last century. They have no plan to address the widening disparity in income beyond what has failed for the last century. The list goes on and on.

I cannot admit to the second choice, either. If this were truly a case of Yellow Dogism, there would have been a viable independent choice from who they would be defecting. In our political arena, they are hamstrung into choosing between Red or Blue, Democrat or Republican, Evil or Less Evil. They didn’t run from Independent Politics, they ran from Republicans to Democrats.

I choose the (like our political system) unmentioned third choice: I admit that the Republicans really are that bad. It is quickly forgotten, however, that the Democrats aren’t much better. Despite the debacles of their reign, almost half the country still thinks so, or the Democrats would have completely swept the Republicans from office. And what about the massive percentage of people who simply didn’t vote? What is their perception of the current system?

I see the Independents, as well as a huge-but-unknowable number of Democrats and Republicans, swaying back and forth because they are too afraid to try something new. They are too afraid to vote for what they want, rather than against what they don’t want. The problem is, when you vote against what you don’t want, the chances of getting what you want go down dramatically.

An illustration is in order. Let’s pretend we’re voting for fruit: Orange, Strawberries, Grapes, Apples, Apple Cores, and Pears. Okay, so an Apple Core isn’t exactly a fruit, but I ran out of clip art. 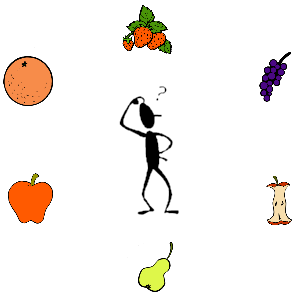 So let’s put down some demographics: The people who really like Apples (in blue) despise Apple Cores, and the Apple Core lovers (in red) hate Apples. There is another, larger, group who really prefers Strawberries (in green), but they tend to dislike Apples and Cores rather evenly. When it comes time to vote, the Apple-leaning Strawberry-lovers are told that if they actually vote for Strawberries, they’ll be forced to eat Apple Cores! And the Core-leaning Strawberry-lovers are told the same thing, except that in their case they’d be forced to eat icky Apples!

So they split down the middle, but when they do that, the constant fighting and pulling between the Apple-lovers and the Core-lovers ends up pulling everybody down to Pears. Nobody even really likes pears - they’re just so tough to eat! - but at least they don’t have to eat Apples or Cores. 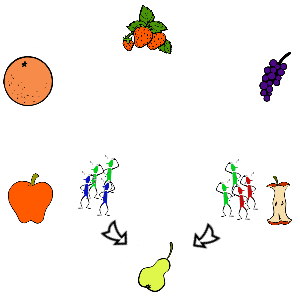 But what if the Strawberry-lovers realized that, in reality, they were the majority? What if they realized that, if they really wanted Strawberries and all worked together, they would get Strawberries? Not only do they get to eat Strawberries, but suddenly the possibility of getting the fruit one really likes opens up the door to all of the people who had stopped voting because they never thought it possible they could get what they wanted! Now, the silent minority for Oranges and Grapes come out of the woodwork, hoping and now given a realistic chance to convince people that Grapes and Oranges really are the best fruit. Even the few people who like those tough-to-eat Pears start participating. Everyone who wasn’t an Apple- or Core-lover before suddenly sees their ranks swell, as the finally have the fair chance to get their fruit. 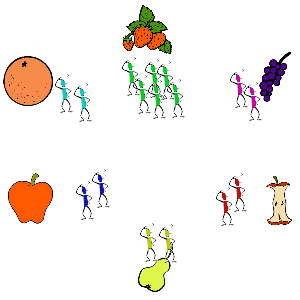 The moral of the story should be clear.