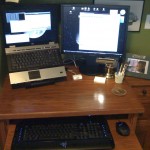 One of the awful, terrible, no-good parts of Vista was its multi-monitor support.  My set up is a laptop mounted in a docking station with a second monitor.  My mobile nature means I frequently dock and undock the laptop, requiring the operating system to detect how many screens there are, switch the primary display to and from the external monitor, and move all the windows back and forth, possibly repositioning them because of the difference in resolutions. Adding to the chaos is that I frequently sleep and wake the computer, sometimes docking it or undocking it while asleep, or shortly after waking.

Vista failed at this horribly.  Often it would fail to detect the new display, requiring me to hit the external-monitor toggle key several times.  On occasion it would detect the new display, but then drive the new monitor at the wrong resolution.  Sometimes, after the first full moon on the second Tuesday of a month where the average temperature had been between fifty-four and sixty-eight degrees Fahrenheit (I think), it would forget which monitor was supposed to be the primary, and I would be forced to re-tweak the settings for three days in a row – and then all would suddenly be fine again.

I won’t even mention what would happen if I put the laptop to sleep, undocked it, and woke it up later!  But to add insult to injury, the churnings of the graphics subsystem would cause flickers and re-sizes for five to ten seconds while it was figuring out whether things would work or not.  The entire experience was nothing short of maddening!

I am pleased to report, however, that Windows 7 has been flawless.  It never fails to correctly identify the monitors present, nor does it ever forget which display is supposed to be primary.  The resolutions are always correct, and it makes the appropriate adjustments quickly and with no flicker.  It even handles with aplomb every combination of sleeping, waking, docking, and undocking I can think of!

In short, it does exactly what it should.  Finally!