It’s not church parking, nor is it Adams Morgan parking, but parking arguments seem to be in vogue these days, so I decided to start one of my own.

Meet “The Volvo”. For over a month now, the driver of this Volvo has been parking illegally in front of our building overnight. She usually parks in the evening, after official ticketing stops, and usually leaves in the morning before the DDOT officers make their way down 13th Street - if the even do. We know it’s a she because we’ve seen her now and then in the vehicle. 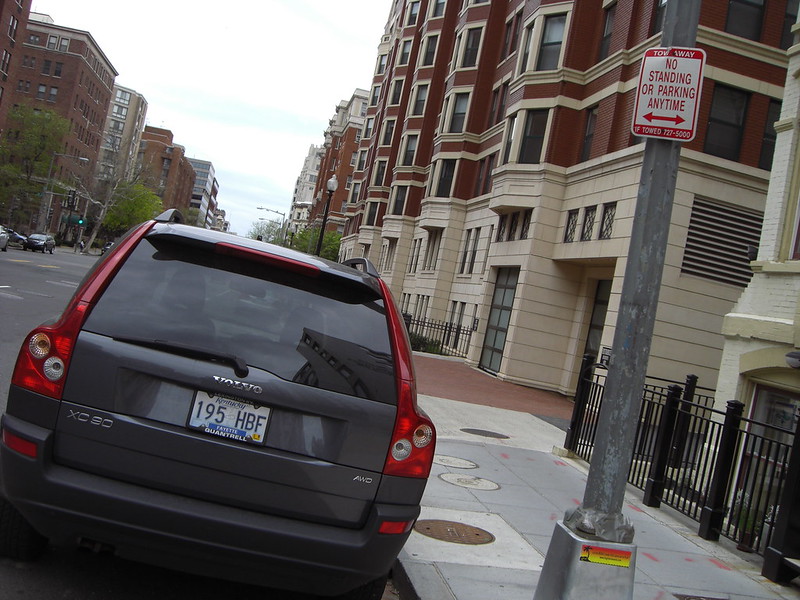 Now, Hedda and I came to one of two conclusions about this female: Either she is willfully violating the law, and parking in the fire lane in front of our building, or she’s a buffoon, and thinks she’s the luckiest person alive for finding the exact same spot every night just steps from her front door. (We’re pretty sure she lives either next door or across the street.) We’re guessing it’s the former, though, because we know for certain she knows it’s illegal.

How do we know? Because not only is it clearly marked no parking, but she’s even gotten a parking ticket once! (Yeah, we called it in. Hedda actually put a service request in online, and it worked!)

After her ticket, she had stopped parking there for a week or so, but then, a couple of weeks ago, she was back. And back again. And back again. Tonight, while Hedda and I were eating a delicious chicken Caesar salad, she pulled up in front. Except, because there were some folks loading into a car in front of our buidling, she instead pulled forward and right into the fire hydrant zone next to our home. She dawdled a minute, as though waiting to see if the folks there would leave before she got bored, and then shut off her SUV, got out, and walked away.

At this point, we were livid. Not only is she continuing her pattern, but now she’s endangering ours and other buildings in the neighborhood. So when we saw her coming back towards her car a few minutes later, I walked outside and hollered, “We told the people to move their car, so you could have your usual spot back!” A bit cynical and passive-aggressive, sure, but what the hell.

She stops. For a moment, I wonder if this pregnant pause will be the end of this, but instead she begins walking towards my perch on the top step of our porch, behind our gate. “Are you being hostile with me?”

“Damn right I am. I’m tired of you parking illegally.”

I’ll admit right here: Things get a bit out-of-order here, as we devolve into a full-fledged street argument. I’ll do my best to summarize her arguments, and my responses.

Basically, she repeated those same arguments, over and over. The weirdest part was this random dude walking down the street, who tried to get involved. “I park illegally all the time. What’s it to you? What’s it matter to you?” I pretty much ignored him. But the whole fire-life-safety thing seemed not to factor into his mind, either.

So finally, after accusing me of “accosting her”, despite the fact that she physically approached me and I never left our property, she said, “I’ll pray for you,” and walked away.

Yup, leaving her car parked in front of the fire hydrant. So Hedda called 911. An officer arrived a few minutes later, and gave her a ticket. Hopefully the tow truck will be here soon.