Though we usually walk most places, since we are without cars, Hedda and I will hop into a cab more often than many. The impending switch from the archaic zone system to standard modern taxi meters is a welcome change, from a consumer’s perspective. The drivers, though, have been in an uproar since the switch was announce. Or have they? 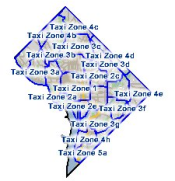 More and more, the protest against meters seems manufactured by some power-that-is, that somehow benefits in some murky and little-understood manner, and not by the cabbies themselves. That this grass-roots movement is turning out to be astroturf is made firmer in my mind by our personal anecdotes. Whenever we grab a cab, we ask the driver his opinion on the impending switch.

Our sense is that most of them really don’t care. They realize there may be a minor change in income - more for some, less for others - but that it will work out to be roughly the same. Further, almost all recognize the meters as an improvement to the customer experience, and an end to most of the fare arguments with customers. Finally, all of them felt the meters were a done deal, and there wasn’t anything to be done to change it.

So who is behind all the hubbub? If it’s not the drivers, then who?