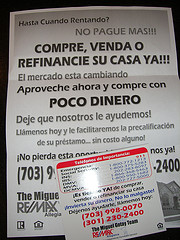 I got this amusing piece of junk in the mail this afternoon. Before you think too highly of my multi-lingual capabilities, I can assure you that the only languages I know other than English involve compilers. I did take three years of Spanish in high school, but my knowledge of the language could be easily described as muy pequeño.

However, despite what one might believe from my photographs, my surname is quite hispanic. When my name gets sold to a marketing firm, they naturally assume - quite correctly - that someone with that surname is of hispanic descent. The problem occurs because they further assume I speak Spanish.

Simultaneously funny and offensive to me is the magnet they sent along with the flyer. Do you see the third number on the list? I can promise you that would never be on a real estate magnet sent to someone with the last name “Smith.”

When I was growing up, my mother and father tossed junk like this every other day, but it has only recently that I have begun to experience this joy firsthand. Also when I was little, we would also get plenty of telemarketer calls from Spanish-speaking people. It was always humorous to receive those calls because most times the caller could speak only very limited, broken English. They would get a couple of syllables out before the realization that their call was answered in English by somebody who quite clearly had no hispanic accent, and the invariable stutter and befuddled pause, followed by the hasty apology and hang-up, could brighten any day.

I don’t receive calls like that anymore, but I think it’s because I hardly ever receive telemarkter calls. The only phone I have is mobile, so they cannot call it for fear of retribution. The one or two that I have received have all been in English.